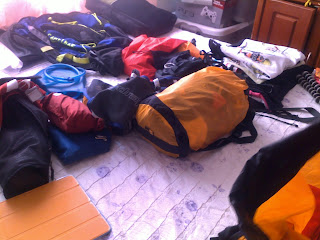 This DVO trip is unexpected. Davao city is something far down in my places to visit for the reason that it's always being described as the biggest city of the Philippines. The word 'big' just scares the untravelled smalltown girl in me. I'm scared in a way that it's too biG, I might end up doing nothing as the bulk of my time will just be spent figuring out how to navigate around that place.

Anyhoo, a chance to visit it came up when Mark will be attending the Startup Weekend Davao (SWDavao). It's a 3-day meetup where participants would conceptualize a business / product / service, then build a proto-type of it over the weekend. Then, it's a perfect timing that Milo Marathon Davao leg will also happen on that weekend. The more I want to tag along.

Thinking over the stay there, I really have not much idea on what places I'll be visiting except to be at SWDavao. So going around Davao will be based on people I have become fond of online.

* Piclyf team
I could no longer recall how I ended up signing up for twidl.it, the piclyf before it became piclyf. It's been that long, it would be nice to finally meet the whole team behind it.

* @tweetitow friends
I could still remember the first few usernames, outside my circle of friends, who used @tweetitow.

@ariannechan was one of those first people. I think we met online as we're figuring out a way to use another SMS twitter client at that time. I think it was isip.ph or maybe a different one. Then @tweetitow was released, I then contact her back or something like that. Anyhoo, she's one of those few who I would always bother to check on some functionality or bug or whatever.

@liezlfabian. We call each other imaginary friend, because well we haven't really meet in real life. Hope, we will no longer be imaginaries.

* Team Davao Runners (TDR)
I met them first at Mt. Kitanglad Race. They're for sure busy with the Nov. 17 CUC 100k leg 2 race. So I'm hoping I'd be able to meet and run with them in their territory if their time permits. :)

* Then I'm really wishing I'll be able to find a person or a place that sells herbs and plants, and some exotic concoctions. :) 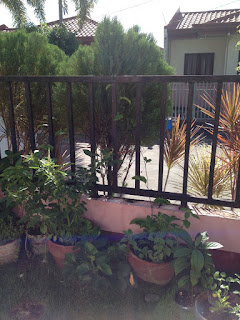 Vermicultured soil is shit from worms. You feed worms your scrap, they eat them, and then shit them back as earth. (note that scrap means uncooked fruit / vegetable etc). It's nutritious because imagine the nutrients from the scrap.

Anyhoo, i made an experiment if vermicompost, worms' shit, is better than cow/pig's shit.

Using the 2 passion fruit seedling 'gifted' to me from Esel of Loboc, Bohol, i use pure vermicompost on one, and the typical garden soil made up of cow shit / tipasi (rice husk?) on the other.

And, voila! The one on the left side is the vermicompost, and on the right side
Is the typical garden. You can no longer see the passion fruit as spinach (kulitis) invade the pots.

Obviously, basing on the pic, worms' shit is the big winner! It made the spinach obese. :) Buyag!

So all i want for Christmas is vermicompost soil. It's P10/kg at Barrio Luz Barangay Hall, look for Purita.

It's definitely more expensive than the regular garden soil. But then remember that they're going to end up in our body. As they always say, if we aim for the best fuel for our car, so much more with our body. :)
at 8:50 AM No comments: 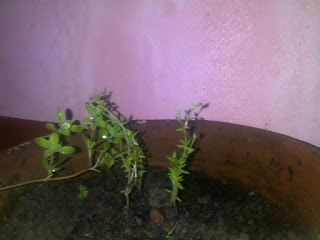 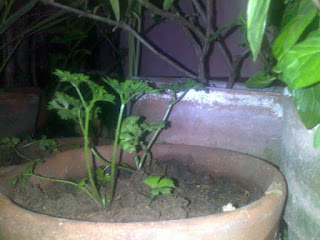 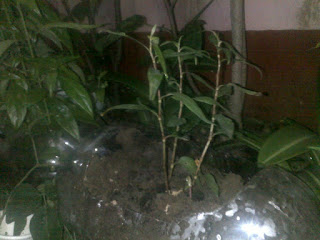 I've been waiting for another episode of rainy days before I'd transplant the new seedlings I bought, and some other old plants we have. But it looks like hurricane sandy took all the rain. So I decided to go on before they all become trees.

I transplanted the parsley seedlings. I guess it was not a good idea to get a packet of seeds. There's no problem in germinating them into seedlings. Parsley was easy to grow. Problem came when there were 101 seedlings sprouting. I just have no space for them, and I don't know how to handle them when they're still these tiny little seedlings. And so a lot of them just died. :(

Then there were 2 seedlings I got from Super Metro's grocery. One is Vietnam coriander. I think coriander and parsely are the same or maybe related. But this Vietname coriander looks like it fit better our tropical climate. It's more sturdy. And, it looks like it propagates like mint. Bu it smells exactly like a coriander / parsley.

The other seedling I got from Super Metro is that I forgot what it is it. I'm confused between thyme and marjolen. But I think this is thyme.

Then, I rearranged the other hers I have into hopefully putting them in a shadier place. The heat the past days was really really bad, the thai basil looks like it's dying. I'm depressed as it was very blooming before that. Anyhoo, I placed it under one of our malunggay plant, which will hopefully give it shade.

Then I placed the italian oregano and tarragon beside the gumamela. Hoping the gumamela will help in lessening the effect of heat.

I also have a few tiny seedlings of siling kulikot which I got from our home at Badian.
at 7:58 PM No comments: