My mind, our home, our kids are in chaos as of this moment. Well, it's always in chaos but this time it's a bit on a notch higher. Maybe a good long torturous run could sort it out, but I'm not in the mood.

So I'm posting about this so I can take off my mind from the leaning-on-a-negative chaos kind of day.

Last week, Migi and Meg were tagged along by the MIL and relatives to their Bohol trip. Lucky kids, I've never been to Bohol yet.

Following are few of the 300 pics given by the MIL to me. 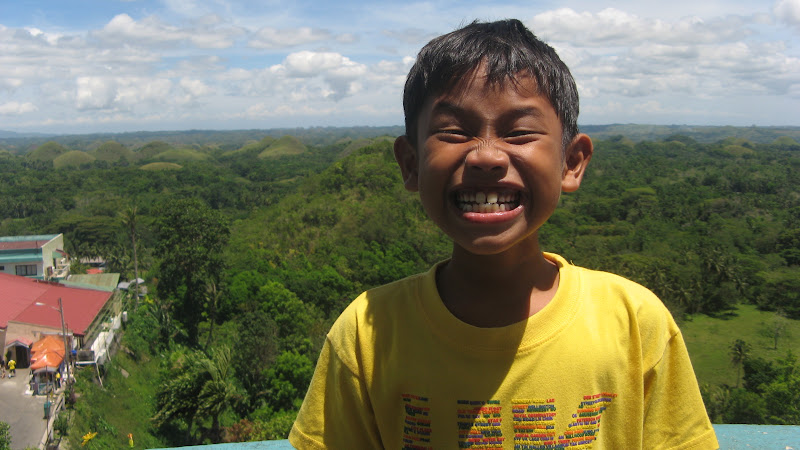 I'm not really sure what's the point of the kid in costume when we all know there's no longer indigenous people in Bohol. Maybe I'm just in a bad mood today, but I felt it's kinda sending the wrong signals especially to the kids. Something about the a kid in a "silhig-looking" costume holding a "coconut-tree lizard" (I just made up that animanl name) felt like child + animal abuse? Not that I have any solution to offer so I will stop sensationalizing it. 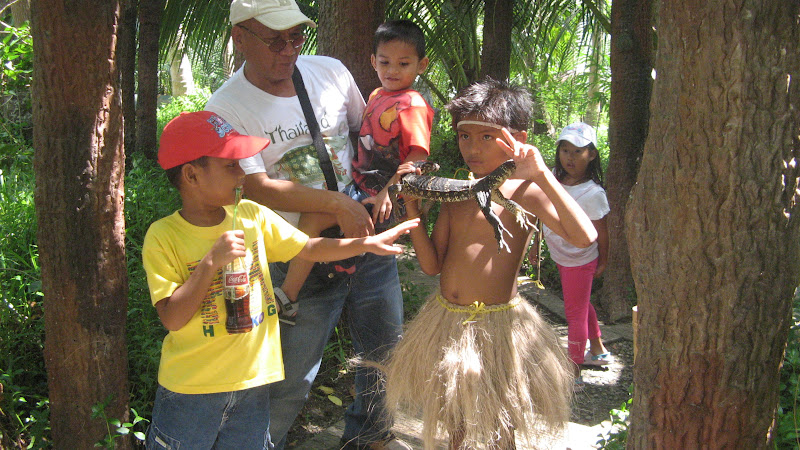 I love this except that the MIL cropped Migi's head. Clowning on pictures really looks cute on kids. 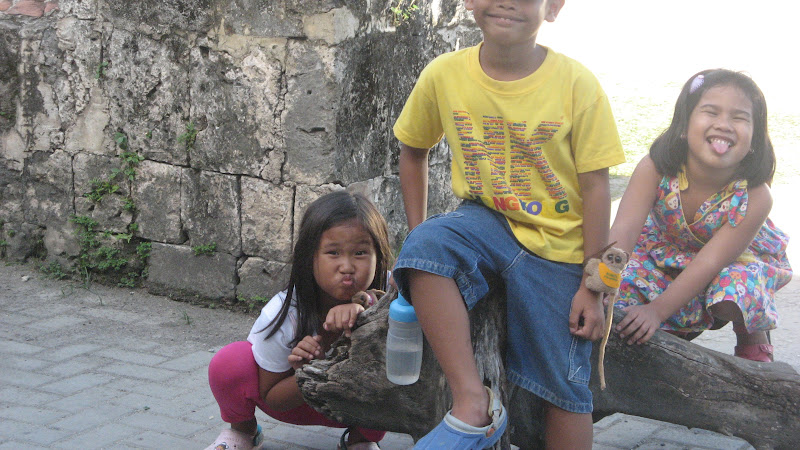 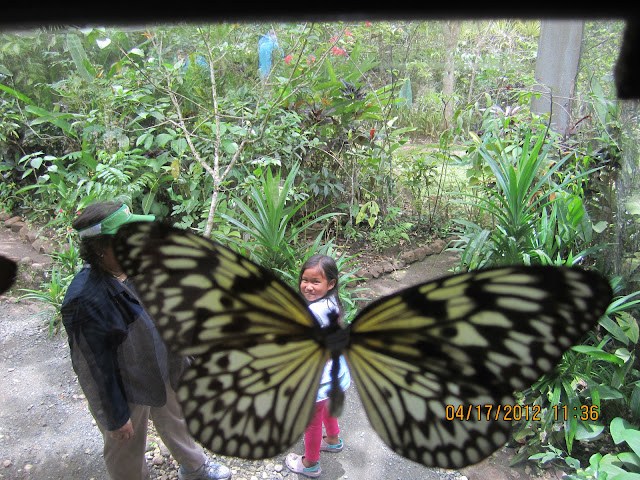 The whole Bohol Trip gang -- thanks a lot for tagging along my kids! 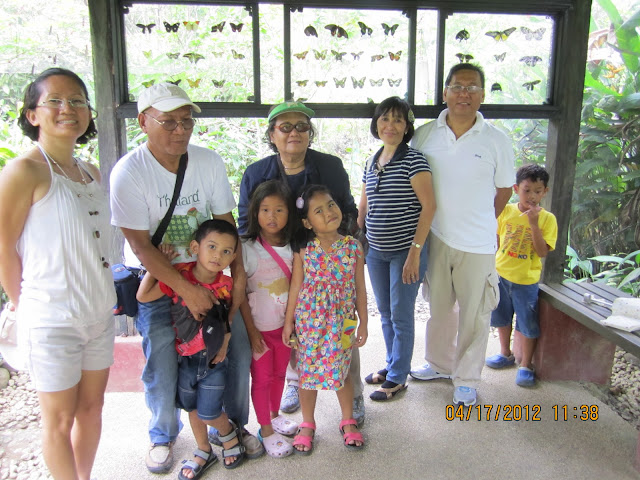 Our Second Ever Family Picture

This was our first ever family picture. This has been printed over and over again for my kids' school assignment which asked them to bring a family pic.

Finally, we got a new version. Below was taken earlier after the Quota Trail Run. Not really a better version. We still look topsy-turvy but I guess that's just how it is we are. 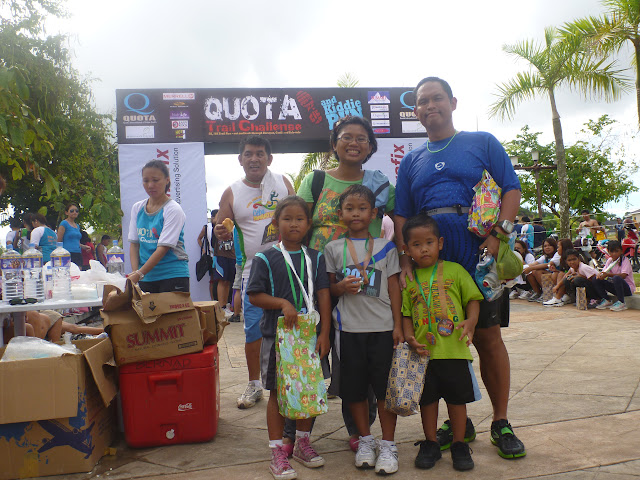 (For some story about our Quota Trail Run, click here >>. Yes, I do keep a "running" blog.)

Yes, I've been watching a lot of movies / docus about running. Anyhoo, of all the movies about running I'd seen, this line from Prefontaine (story of Steve Prefontaine) kind of struck me /us most:


In the movie, it was stated by the coach of Steve (co-founder of nike).

This struck us most because it kind of resonates to Mark's role in his work.
at 3:12 PM No comments:

Reminder for Me, as Parent

Even though you love your child...
...you must let them go to the other side of the mountain.

I was watching the trailer of Town of Runners, a documentary film, and I saw this subtitle. I guess letting go, giving the kids the free reign of their lives might be much more harder than providing them with their basic needs -- food, shelter, and gadgets. =)

The last thing I want to post here is about running. But then I just cannot resist to be bragging about my kids' first organized fun run -- Run for BB. I signed up the 3 kids. 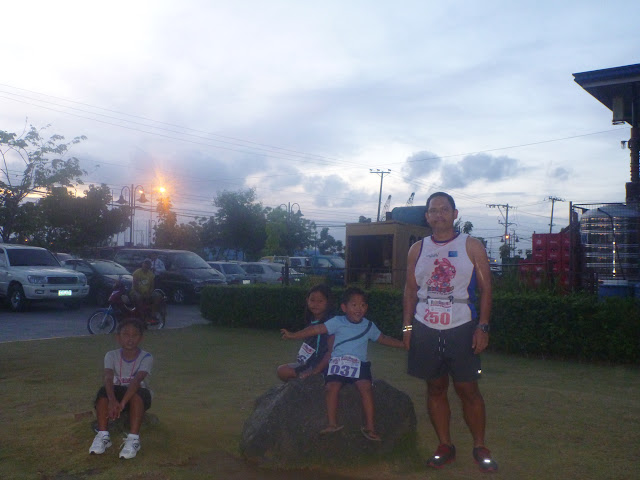 Migi. I intended to register Migi for a 400M dash run but Mark said it's too short for Migi, and had him signed for a 3KM run. But Mark's going to accompany him. Being sporty is something natural for Migi so it was not really much of a question or a surprise that he'd be able to make it.

Since Migi was in the 3KM, he and Mark were the first to go. I think they're a bit too fast. I did not notice them crossing the finish line. A bit sad that I was not able to get a pic of Migi's first finish line crossing.

Migi looked like he did not break a sweat. 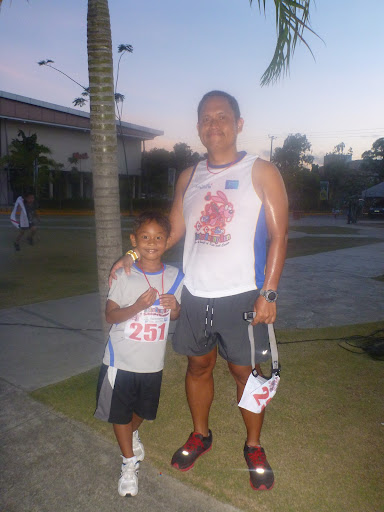 Mati. Mothers / parents always have this gut feeling of what their kids are into. But with Mati, I just could not see what is that certain thing / activity he is really into. Migi has this natural talent for athletics. Meg is big about doodles and arts. Mati is I don't-know. He seems to have some 'theater arts' traces as he can be very animated.

So anyway, I signed him up for this fun run just because one of the sibs is joining. You know that sibling "all or nothing" kind of thing.

He was the second to go for a run for the 200M dash. And, his finish line drama looked too familiar. We have the same 1st finish line experience -- crying.

I thought he was crying because he was cranky from waiting too long for the kiddie dash to start. Later on, while I was consoling him, he told me again and again in between sobs, "Wa ko daug. Hinay ako dagan." He did not stop crying and saying how slow he was on our way home.

At home, he told me to get him a shoes so he can run faster. Yay! Blame it on my laziness and my being fan of barefoot / minimalist running. Anyhoo, we found some hand-me-down rubber shoes from Migi. And, off he went running outside as practice for his next run. I'm just glad he's able to pick his self up. 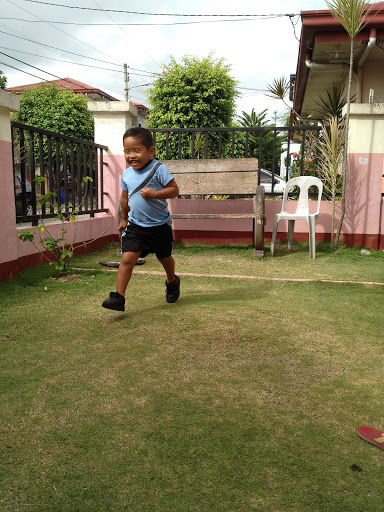 Meg. When it comes to sports, Meg has been underrated. She usually declines to be enrolled to tennis clinics (we're just a few meters away from a tennis court) as she believes she's meant to be in a ballet class. Eeekkkxpensive so nothing happen to that belief. But Mark, instead, got her a bike and she's the official bike tutor in the neighborhood. So those sporty kind of activity is really more of a social event for her than a physical activity.

When she got dressed up for the run, I asked her if she's going to wear his white rubber shoes or her high-cut kind of pink chucks. Being Meg, the pink-ier the better so she ran in chucks.

I kind of actually thought that she'd pull a drama-queen, and won't run. But surprise, she came first in the 400M dash group. I got teary-eyed watching her beaming with happiness and pride getting to cross the finish line first. 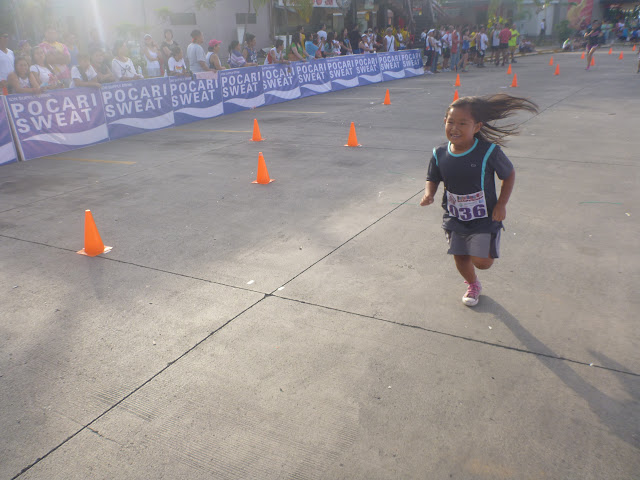 She actually kind of won it more by being 'smart.' (I'm not saying the other kids are not. Please forgive this proud mother.) She was not in the lead, but the lead missed the turnaround. That's why she was able to overtake them.

Anyhoo, we'll see next Sunday if Meg's winning is just a fluke, if Mati can redeem his self with some old chucks, and if it will be just another day for Migi. Yes, we're joining yet another fun run. =)

Before their run, still excited 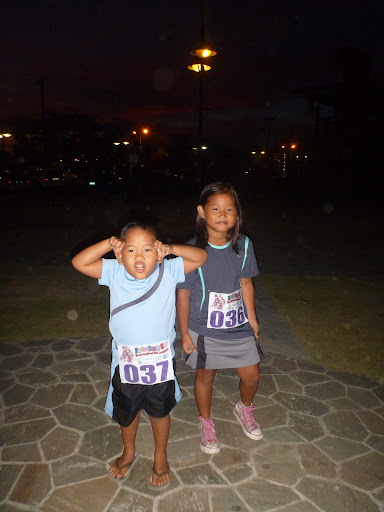 Still before their run, got bored waiting for their turn 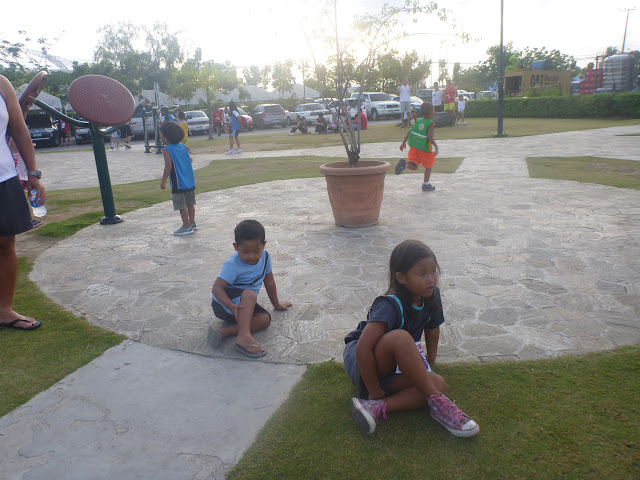 I've been wanting to update my multiply again regularly. But it feels like that of a close friend back in grade school, and then you finally meet, and then you realize that a lot has change between the two of you that you no longer know how to connect with each other. And so subsequent meet-ups would just be up to "hi and hello." So that's how I'd been feeling every time I open my multiply account, hoping to update it about bits and pieces of my life but I just ended up just giving it a quick hello, a quick browse, then bye.

But unlike a long-lost friend, I just cannot let go of this little piece that keeps 20 pages of album photos and 73 pages of my rants / thoughts about me, myself, and I, my kids, my husband, anyone that annoys or amazes me.

So hopefully this is a start, instead of just saying a hello and then exit. This is kind of important to me because it's not really about me -- but more about my kids, and few ramblings to annoy the husband, and yes, about ME! =)

So the kids, every time I would be asked about the traits of my kids, it will be:

Invisible KidMigi is the invisible kid. In the house, I do not really much hear from him except on the obligatory sibling fight. Most of the time, he's just in the corner playing any thing video games. I know it's bad but what can I do, our house is one cyberzone of gizmos.

But on the brighter side, he does also demand to go out and play tennis. He has Saturday classes, which he sometimes attends and sometimes not.  And, I'm proud that he biked around Cebu City with Mark, a good 10KM+, during the Earth Hour celebration.


This was taken during the 1st time he went alone to the Tennis court. 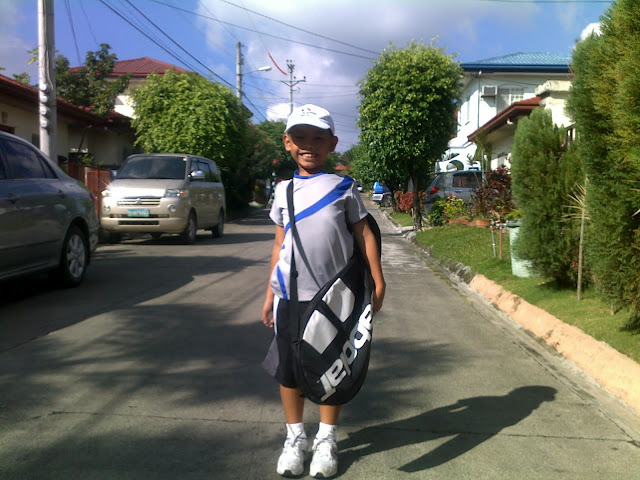 She can really be annoying but at the end of the day, when I see her tucked in bed holding her stuffed toys, lady bug and spongebob, how can I not feel lucky! =)

She just finished pre-school, which means I now have 2 graders. Ow how time flies! =) 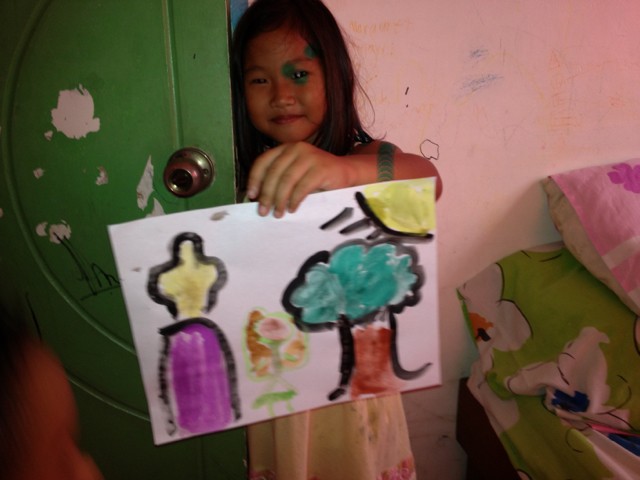 Always the BabyI cannot deny that Mati is spoiled. He is everyone's favorite. I guess it's one of the perks of being the youngest. He is the family's troll who is such a tease to his older sibs.

And, again how time flies so fast; he's going to be schooling this June. After 2 tries in taking the entrance exam, the teacher let him in. The first try was he crumpled the test papers and threw away the pencil. I'm not really proud of if but on the other side, at least this kid is not afraid to express what he feels. The second try, he finally cooperated though he did not get any correct answer. 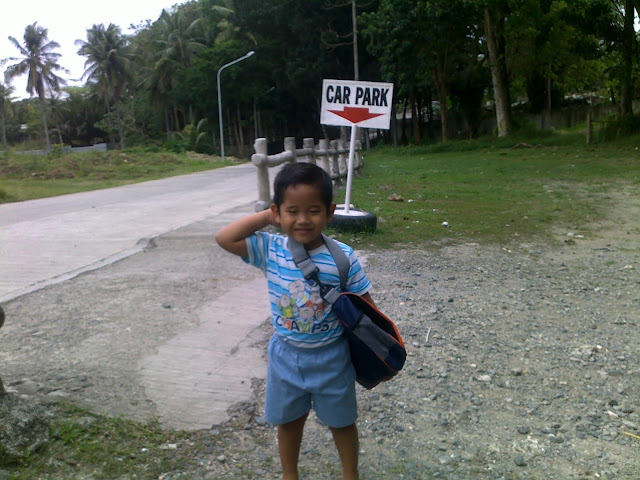