I guess it's more than a year that we'd been planning to dispose the L300.  It was not much been used since Mark doesn't bike that much anymore.

Anyhow, it's already 2016, the need to dispose it just became "urgent." Since I have more time on my hands now, there's just no excuse of no one taking care of selling it.

So I resorted to the friend I know best who can help me -- the internet. =) I then found myself posting on different online sites -- istorya.net, olx.ph, facebook. I have a paid account of istorya.net for some time in support of the friends running it. =) I got the cheapest Ad Boost package of olx.ph, and paid the minimum for fb ad. Then, I thought wow, this is probably how an AD MANAGER feels like. I felt like making a career out of it.

I was planning to post on more sites because I'm desperate to get rid of the car so that Mark will stop nagging me. But then texts and calls of interested "buyers" got me busy. And, then I doubt if I want to be an ad manager ever again because it entails sorting out the legit and just nosey prospects.

Anyhow, the first "contact" was kind of aggressive that the L300 was gone in less than 8 hours. It was so quick that I was not even able to make an emo over it, and say my last goodbye. The buyer was actually just living within the vicinity. If I had just known, I could have gone directly to him and save me around P500 worth of ads (which is actually not a bad cost. It pays to pay.).

Another thing I learned from the "transaction" was the different hierarchy of the "second hand buy and sell" business. So there's the very interested buyer who contacted me first, check the item, then would contact his "boss," the moneyed boss.  Apparently, the aggressive "boss" looking buyer is not yet the final boss. Then, there's the hocus-pocus of the "pricing" of the item between these "bosses." So the first person I made contact with was actually a middleman, who somehow made money from the seller and the buyer, thus the hocus-pocus on pricing.

To keep more info of the price of the L300 from the real boss, the middleman told him that he found our L300 via a newspaper ad. So much of my effort on the internet went unacknowledged. @.@ Gawd, my being millennial was insulted. =)

(Among the 3 ad sites, it was the OLX.ph which gave me the leads. This has been the second time that my item got sold within 24hours. This is to acknowledge to effort put into olx.ph.)

The aunts and uncles commented, "Sa internet. Tanan butang kay buhaton ni day rose sa internet," was their answer when they were asked where the food came from. I wished they said that I'm "millenial." :)
I always had this itch to use new service apps when it became available locally. It feels like "really this is happening in Cebu, Philippines?!?" I tried grabtaxi, and uber. I'm leaning more on uber for the convenience of having not to think about "paying" because it kinda happens in the background -- it removes the guilt of not giving out tips. :)
I wanted, for a long time, to try foodpanda but there's just no right occassion for it until my mother's wake. St. Peter in Imus is situated "awkwardly" like there's no direct jeepney route that passes through it, No known nearby carenderia's or restaurants. I mean the people I would ask to buy food would have to roam around first to find them.
So the internet in me tried foodpanda. The first order i made was ngohiong and puso from Lotching's. My relatives were so amazed that i can order on internet "puso" and "ngohiong." But I purposely ordered them because they're not that expensive so that if it failed, I would not lose much.
And surprisingly, the service was fast. Foodpanda would send SMS and calls to update you with your order -- from confirming to delivery. Somehow, they made you feel "secure." And orders arrived fast. If the supplier has delivery staff, it will be their staff; if none, foodpanda delivery staff will do the job. I kinda prefer the foodpanda staff to do the delivery, they're much quicker.
The only downside of foodpanda is that the number of order per dish is limited. Like I can only order 20 puso in 1 transaction so if I want 50 puso that's like 3 transactions. But i guess it's for the best of all the parties involved.
So onto the title of this post, the new food finds i like which I discovered via foodpanda are:
* Ngohiong from Lotching's. It was first time to try it and  we like it.
* The boneless lechon from Tatang's was also good -- they have a way of making the skin's crispiness last for some time. 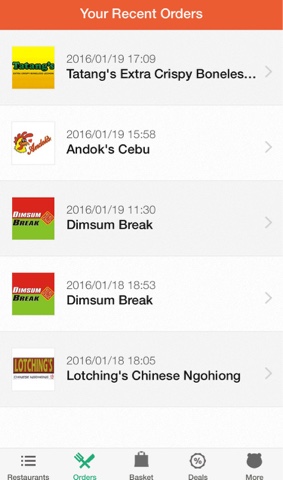 I wish it's available in Consolacion. But i'm thankful that it's not or else my cooking skills can no longer be found.
at 8:22 AM No comments:

Since I'm an absentee mother, Mark's taking over the kids. If you get annoyed seeing lousiness in other people, how much more when you see it in your own blood, children?!? So probably after a frustrating weeks of seeing his children who get so good at slacking, here is the best Mark can do: 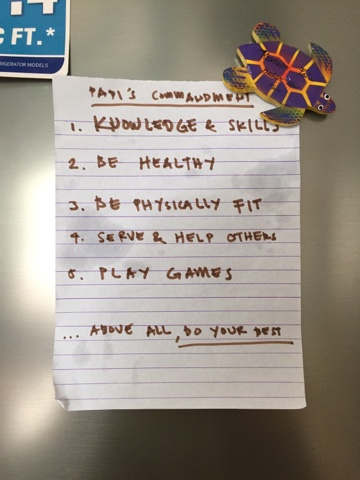