Dinuguan and piniritong danggit are mine.
The bad-assest Dinuguan for me is by my aunt. The main reason why I would attend their death anniversary celebrations because it's one of the few occasions I get to taste it. @.@ But she no longer cooks this, maybe because she's now leaning to be health buff?
Though they serve dinuguan at their carenderia, but it was not as bloody comforting food as the one served at the memorial park during the death anniversaries. 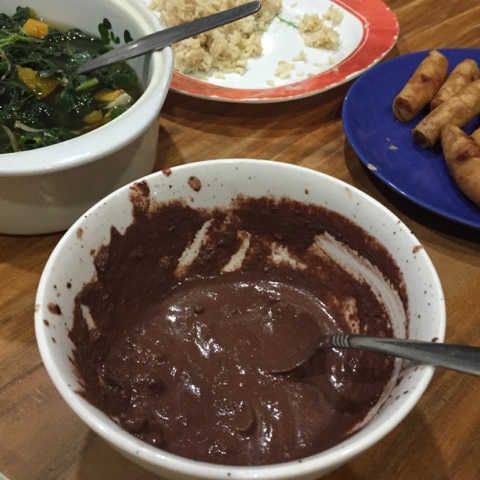 While staring at the dinuguan, eating dinner alone, I became nostalgic. I remember my childhood Sundays at Badian. My nanay would bring tupperware to the Sunday mass, which she would use to contain the dinuguan we'd buy at the "merkado" on the way home.
And Back in my childhood days, piniritong danggit was like the hotdog of today. And there's no sweet-yummy danggit than the danggit from home in Badian (must be the cleaner sea there).
My neighbor playmate "mao-mao", we used to divide the danggit into halves.  He loves the "head" part, while i love the "tail" part. In the afternoons, after a sweaty playing, we'd then sit on the table and munch on the leftover piniritong danggit, either in our house or theirs.
Mao-mao was also the playmate, who we dared each other who can eat the dirtiest "ikasen." Our trick could range from dipping the ikasen to the sand, soil, soil mixed with water.  Thank goodness, i could not remember shit. Eeewww!
Then his mother, who is a pediatrician, would then prescribed my mother the deworming meds when I'd complain itchy ass. @.@
Then I should stop reminiscing or else it would be a crying fest for me. Definitely, i have an amazing childhood memories. I have to thank my nanay for that.
at 5:49 PM