I was ready to have my fallopian tube cut after the 2nd c-section to deliver Meg. I was waiting at the operating table with an open tummy when the medical staff came back, and told me they could not proceed with the ligation because my very smart husband did not sign the consent. And I could do nothing but silently cursed my husband while the medical staff stitched my stomach back.
Two years and a half after, I was back at the operating table. This time to deliver yet another "unexpected " baby (as I was really planning to have no-more baby or at least wait for another 5years). And, this time, the husband got wiser and "broke-r" and so he signed the ligation consent.
I was supposed to name this boy Barachial, he's an angel. But MIL thought that the baby might have problems later with immigration officer because of a terrorist-sounding name. So we picked up the most convenient name, Mateo, in the most Bisaya spelling. Not Matthew or whatever other variation so as to easily spell it out. But unfortunately, people tend to spell it the "American" version or Italian - Matthew.
We were already preparing for 2 years of "horror life" of raising a baby -- no sleep and all the grumpiness that comes with it. But fortunately, either because of experience of winging out babysitting or Mateo came out to be a not so horrible baby. He's somewhat "calmer" compared to the older ones. He's quite an enjoyable baby. Somehow Mateo made me re-think of my ligation decision (Though, in medical sense, it's not really safe to stretch it to more babies when you have c-sections.)
Being the youngest and a bit of a gap with the 2 older siblings, Mateo can be sometimes "taken for granted" in this family. Sometimes, he's treated as that "baby" and sometimes we forgot that we have a baby. He's kind of like that "extra" family member that "oh yeah, we have that family member" that needs to be considered in decision makings (Mmmmm like selecting appropriate video games). Anyhow, he is that "enjoyable" who happens to just do well with the set-up, and no hang-ups.
In the world of the "older kids," he's the wallflower. But he's also the master in his age group because he knows more video game tricks; thanks to the older people who think he's a "flower."
But his being "extra" was kind of re-think last last year, when this "enjoyable" kid said he wanted to "die" because he felt useless while he was crying. I felt I was/am such a horrible mother. Honestly, it was my fault. I was really in this made-up busy-ness at that time that this "extra" member was somehow totally forgotten. I guess he was also struggling with his reading skills big time (and probably felt bad that he's left out among his peers). I thought being the "enjoyable" kid, he could just wing it out. Unfortunately, not.
Fastforward, I believe he's an "enjoyable" kid again. I actually forgot about that "sad" incident until he showed me a note from his teacher: 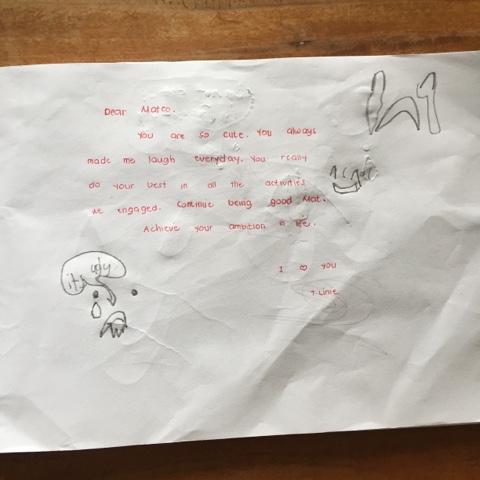 I welcome this with a grateful heart that the teacher is truly being nice. And, I'm really hoping that this is a sign that that part of Mateo is "healed."
Teacher Leni has been with Mateo since his prep days. Honestly, I'm not impressed with her teaching skills especially being a fresh graduate when she started. But she was/is always sincere. Once, she was teary-eyed telling me how worried she was with Mateo's reading skills. And, weird that I had to calm her that Mateo will be fine and assured her that she's doing a great job (Having 2 other kids, those kind of "delay" happens. I mean kids will survive one way or another. Plus Mateo was just like 5yrs old at that time. Boys tend to learn to read later than girls.)
I think Mateo and Teacher Leni has some sort of a love-hate relationship. Mateo sometimes speak fondly of her, and sometimes not; it's probably the same with Teacher Leni towards Mateo. And, I believe this is one of those things more than all those "sun-is-the-center-of-the-universe" kind of learning that I treasure most in a school, teacher, or wherever. (By the way, teacher and I are not friends.)
Anyway, he turned 8 this month, Feb. 18.  Finally, he got a decent strawberry cake this time from @keihlasmom (For orders, look her up on IG with that username.). Strawberry is a favorite flavor of him, and so most of his birthday, he would ask for that cake flavor. 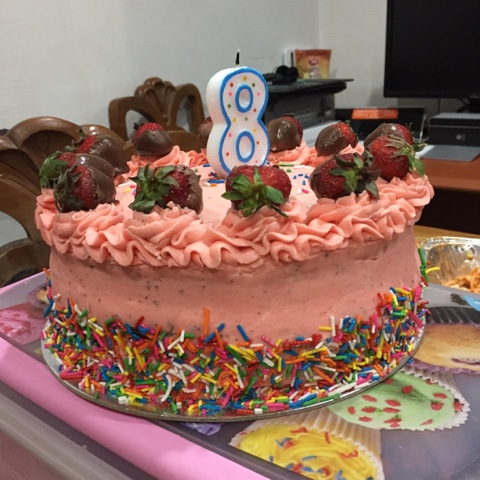 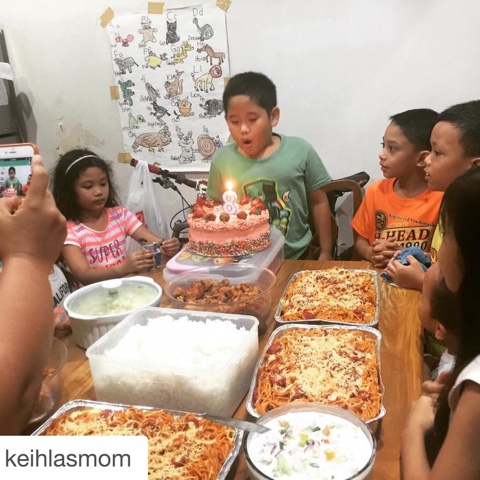 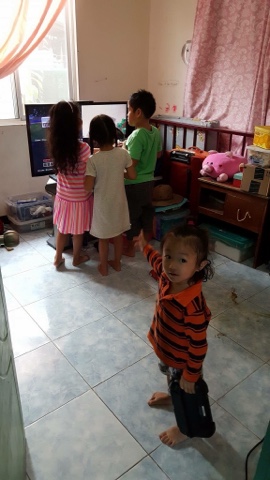 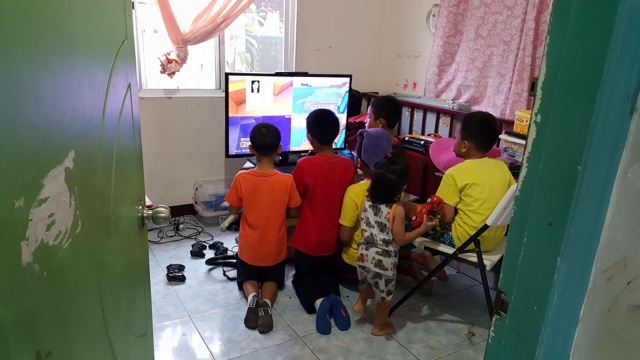 It did not occur to us that we have a "boy" who likes pink, until some people would ask if are we sure with pink strawberry cake. Oh yeah, we sometimes don't put much thought about that "extra" family member.
at 10:42 AM