I hope not. This is not the first time that Migi got into some accident for being extra active.
There was that time I had to bring him to an ER which had something to do about removing his toe nail. (And got to see the "crush ng bayan" turned surgeon at ER.)
I think it was from him playing tennis.
Weeks ago, our neighbors had to carry him home because he crashed from his speeding bike. And there are probably a few more which i could not recall.
But today is probably the worst. I could faint with just a papercut so seeing this, I could feel myself flipped out. But as Mark insisted, i needed to put a brave face like "hey, it's cool for sh^t happens because life is; so suck it up, kid." 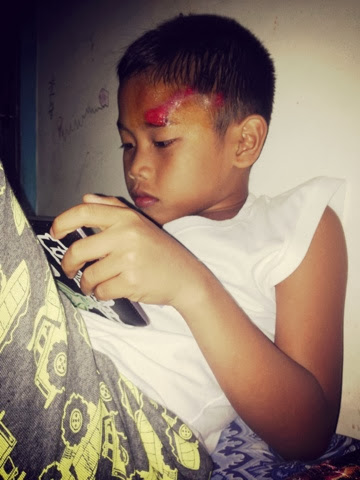 This time it's from him playing basketball.  I'm not really sure if he is fond of playing basketball but neighborhood kids would always invite him every time they go to the basketball court. Based from his account, he stumbled into his playmate which also then fell over him, and so the big bloody wound on his head.
Anyway, we brought him to the "family" doctor and it seems no biggie. Thank, God.
It just got me thinking that he's just 9 year old. I hope nothing worst can ever happen again to him.
at 9:37 PM

Email ThisBlogThis!Share to TwitterShare to FacebookShare to Pinterest
Labels: Kid#1