The RDSAMC Taxi of Cebu Incident

(Dear google, my title is, I hope, a good SEO keyword.)

I was from a talk in Minglanilla and decided to take a cab going to IT Park because it was 9pm+, and the jeepney system of minglanilla now is complicated for someone not a resident there. I had 2 friends who were living somewhere in Tabunok, Talisay so I thought of letting them hitch.

Since the friends are from Tabunok, we did not go thru SRP

When we got into the taxi, I right away felt uncomfortable with the driver. He talked like he was drunk. And there's that sweat drops in his face as the lights inside the taxi was on the whole time. It's either he was "nakasuyop" or "kalibangon." But he was just parking when we got him.

Plus the Plate Number printed on the sides of the taxi's interior is blank. Anyhoo, i let it all escape.

I was thinking of getting off with the friends but I guess I always try to see the goodness of people. *ehem* So i reasoned to myself that I was just being overreacting.

He was a bit chatty. Sometimes he talked to me, but most of the time he's interacting with someone on his radio. He was proud of his radio because he said that not all drivers have it. He said that it was his way of entertaining his self from the boredom of driving. He even mentioned phone sex. He said he like being a driver over a radio actor, which I suggested because he was good in changing his voices while interacting on his radio.

So riding with him was like normal to creepy and back. So everytime I felt he's getting creepy, I'd try to talk to myself that I was just overacting because he'd go back talking normal.

But the gave-away was when we reached the gasoline station after the Capitol Church, he said he would stop for a few minutes to have the air in his tires adjusted. A part of me was annoyed because we're just like 2km away from IT Park, he could do it after I got off. But, i thought, stop whining because other people may have it worse.

Anyway, while we had our stop in gasoline station, he also went down, got a water from hia trunk, then open the fromt hood and pour the water on the car's machine or whatever you call it.

I felt it was for awhile because when we stopped at the gas station, the meter was 218, when we left the station it was already P222.

And it was after that I sensed something more wrong so I got scared. He was now sweating profusely like he just ran a fast 5k. I tried to reason that maybe because pouring water on the car's hood was hardwork.

In my mind, I was telling myself to calm down and that I'm just over-reacting.

But I felt getting weak. And, I was again tellong myself that maybe because I got scared, my heart beat fast that I got weak.

But then I also thought that I should not be feeling weak because adrenaline rush would keep me pumping.  But Instead, I could feel my body starting to get weaker, like "mawala ang umoy." The weak feeling was like when I was given anesthesia when I got CS operation that I could feel my strength slowly leaving.

Read too much FB stories

But I don't want to act stupid, and told myself that I'm just near. I very well know this route, it's the last stretch to the CCM finish line. It's just 2km.

In my mind, I kept telling myself that I was over-reacting because I read too many "taxi incident" stories on facebook.

I reasoned out that if he really had bad plans, he could have done it when wemre still far from my destination.

But then I was also sensing that a few more meters, and I would really pass out.  So I asked the taxi driver that I'd get off at the Koa bar (kukuk's nest before), which we were just probably 300 meters away. I chose Koa Bar because at least, there were lots of people there.

I opened the windows because I was really feeling off, maybe the air would help.

He asked me if i was okay. I told him that maybe I got seasick from the long drive. I did not want him to feel threatened or something becuase he might have a gun or something.

Then he told me that He did not put any powder in the air that would make people   Go pass out. And, I was like how did he know that was what I was feeling?

I did not feel nauseated. It was just generally felt like my strength was leaving me.

But the traffic light turned red at the intersection, before we could cross to Koa Bar. And, I was thinking that if I would wait until Koa, I would no longer have any strength to move so i told him that i'd just get off right then and there.

I was just glad to get off that RDSAMC taxi whose driver was goodlooking but such a waste!

Anyhoo, his trunk was open when I got down so I closed it.

It took him long to drive away that I was able to take a photo of the taxi. Unfortunately, it was blurred. I tried to
Memorize the plate number but with my mind going haywire, i forgot about it.

I'm really not the type of person who take notes of taxi's plate numbers. 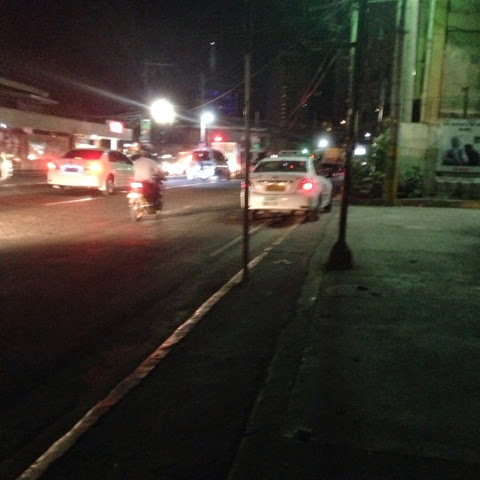 Looking back, I still could not say if I was "scammed" or I just read too much fb taxi incident stories.

But lesson learned is that if it does not feel right, there's no problem in getting off right away. This perfectly applies on taxis, but maybe not in real life.