I had a conversation one time with a sports apparel maker in cebu. He's a foreigner, and he's building a brand. So we got to talk about the different people of different sports -- their buying behavior.

So if different individuals of each sports will be assembled into a pyramid, it will be like: 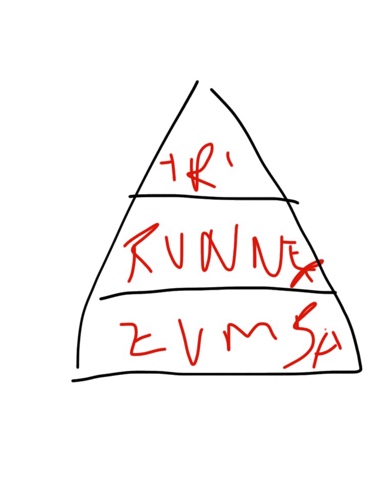 The zumba tend to have a "mass" appeal. Because there's a lot of free zumba sessions. So mostly they go for the affordable apparels. The runners tend to buy more than the zumba individuals. But the money is more in the triathletes.

But this post is not about the zumba, runners, or triathletes. This is about YOGA.

Yoga taught me how it is to be a middle class. Business news has always been saying that there is a rise of middle class in Cebu, etc etc. But i cannot seem to figure out where are they.

So last summer, i frequented the BTC yoga place because of Migi's summer class nearby the place. And to kill time while waiting for him, i surrender to the mat.

And, i realized that BTC seems to be the hang-out place of the "middle class."

The Soccer Moms (i'll just name them as such)

Sometimes, i found myself smuck in the middle of lululemon wearing mommy friends (i assumed) whose some of them have kids are in Gymboree. So they yoga while their kids are making tumblings and clapping hands at Gymboree. Their routine tend to be like: Some of them came from another gym class, proceeded to yoga and then they'd be planning to do some laps in one of their houses' swimming pool or go back to the gym. Or maybe they'll have lunch at the nearby restos in Ma. Luisa and exchange travel stories to disneyland.

Sometimes, i'd be in a middle of expats. Expats tend to be the sporty type. I cannot really say much of them. But they sometimes come in set of family, which is usually mommy and daughters.

They're the group of "business women" i assumed. They come and go. The usual exchange of conversations will be "Oh where have you been?" and usual reply will be "i have to fly there and that." Or another typical line will be "i'm back to square 1 again because i got busy blahblah i missed to practise" and reply would be "yeah, you were already good with your insert-name-of-whatever inversion variety."

They seem to be alwasy there but somehow don't really attend the class becuase for whatever excuses, and then they sell whatever yoga stuff they got from their travel abroad to the other attendants.

So how to be a middle class? We can start hugging lululemon mats in out lululemon yoga attire.