I'm not really a big bacon fan because I grew up to "adobo;" and bacon feels like the pabebe version of it. And, Ate Mona cooks a killer adobo.
But I used to get the packed bacon before, from time to time. Well, we just gotta give in to peer pressure. But I stopped it when I could feel there's too much preservatives from it.
Until I discovered fresh-cut bacon, first at SM groceries. But not all their groceries carry it.
And, I felt how outdated I was at that time. Until a friend was playing by posting again and again bacon photos, and how he missed it because their family stopped eating canned goods or goods with preservative.
And, I was like. Poor dude that he did not  meet fresh-cut bacon-sliced pork meat.
Then, I passed by this at Rustan's yesterday, and think of the poor dude. :) 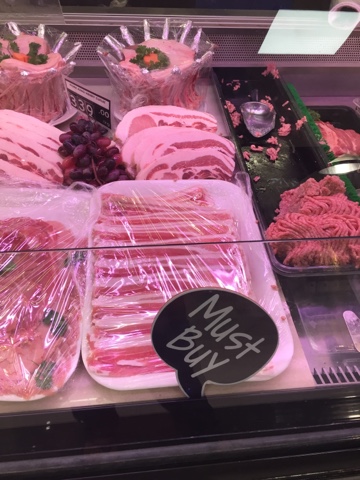 Really, the fresh ones tastes way much better (me thinks) over the packed one, and much cheaper. I just salt and black pepper it, then boil it, then drain the water, and cook it dry (if there's such thing as "cooking dry" or maybe pan-grill is the better term.)
And, if you cannot find this fresh-cuts, well, go macho with adobo! :)
at 10:41 AM