Mati was already throwing tantrums because he's feeling itchy and wanted to go home already after his haircut was done. But Migi's barber took so much time working on his haircut.
I was also getting a bit impatient because Whyever it took so long?! All boys' haircut are the same! And It's just a P40 haircut! Whoever invest so much time on a P40-worth of service?!?
So I stood up, got nearer to Migi and the barber so I could give him my "impatient look" as to give him a clue to just cut it now na!
But he was so concentrated on making those eeny weeny careful cuts on my kid's hair to notice me. And then I realized that he was really putting a much sincere effort on a damn seemingly boring haircut. It was as if he was working on a piece of art. 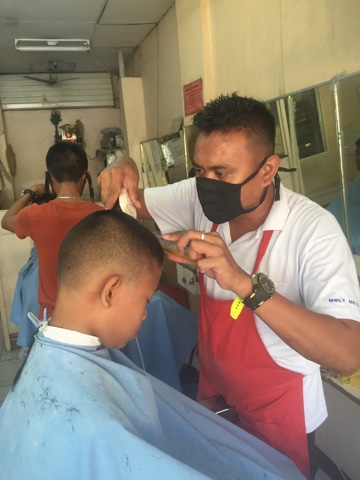 It's so touching to see a man who spent so much time and effort for a P40-worth of service on a random kid who showed up in their shop.
I felt ashamed, and so I retreated back to the plastic chair. This time, observing the people around, they no longer are RANDOM.
On one side of the shop were two men who looked like they are from the construction industry. They seem to be a father and son tandem. Seated on the "barber chair," they comb their long locks with their hands, looking at the mirror contemplating on how they wanted their hair to be done. The barbers approached them and they then proceeded to a serious discussion of how they wanted their hair to be done. It was as if it's a million-peso deal they're discussing. 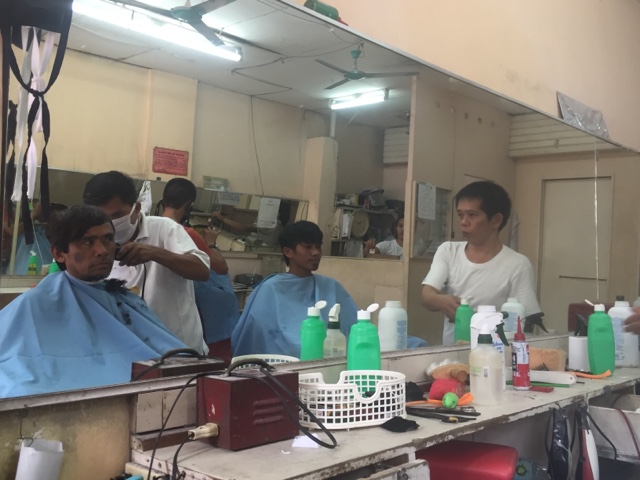 On another area was another barber painstakingly forming the bangs of his client. He trimmed it to a particular style, which he probably have done it a hundred times on this particular client. It looked like they have that special "suki" relationship.
It's like what would happen to that client's hair if ever the barber will no longer be around?!? 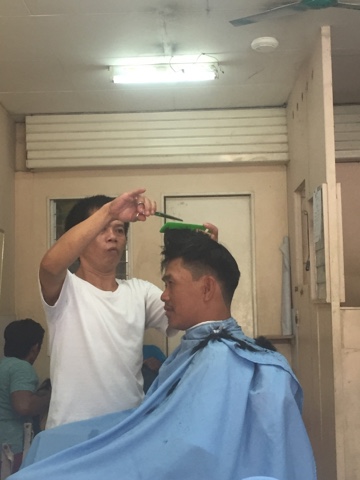 What would happen to them if there will be a new president?
I wonder who could probably be the best president for them:
Who Can be the president be able to continue to provide an environment where men can get and barber service a decent P40 haircut?
Or maybe a president who can make the construction people still afford a P100 haircut?
Or maybe a president who can make the haircut be at P20 because the basic needs, social services, education, housing and other public services are so accessible and cheap that the barber can afford to have a more affordable service?
Or maybe a president who can make everyone afford a P100 haircut as well as provide basic needs, social / healtvhare services, and other public services to all demographics?
Or the very least for everyone to be able find ways to live decently however challenging it can be.
But at the end of the day, Filipinos are tough but are soft enough to be able to bend and blend with whatever is thrown at us.
at 3:43 PM