I found this food processor (moulinex) dumped together with unused items in the cupboard. I think this was the last kitchen "gear" i bought before i got so busy and heavily involved in aktib.
Food processor is used for "blending" veggies or fruits but you don't want to add water which the blender will require. Whatever. :) Or in short, it's the electronic version of mortar and pestle. 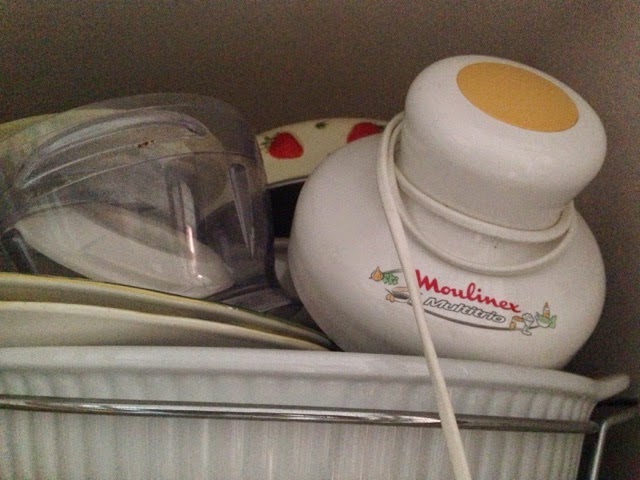 The most use i had of it was grinding onions for kebabs, stuff added to the yoghurt sauce (forgot the name), cutting tomato for pasta sauce, homemade butter, for mashing bananas for banana bread.
The past days/weeks had been quite hard/challenging - transitioning from one focus to another. The one thing embedded to me by aktib is becoming that "business-minded / entrepreneur" person whom it's totally not me before. So it was hard because i wanted to pursue yet another "money-involving" activities, and i just have to stop it, scratch it off from my system. I was trying to shake the feeling off because "priorities," and that i should stop bleeding the husband for money which i'm not sure i could get back -- it's already stupid to charge it as "learning cost."
So i plan of picking on the last activity i got busy before focusing on aktib. I was planting herbs and alugbati, trying to do "healthy" food, researching on organic stuff like frequenting Healthy Options store, making pita breads -- things i usually cringe on. :) But it actually started from a big scary necessity, which was slicing my mother for a major operAtion or trying the "food is medicine" route. So anyway, i ended up in "food" because i thought it's more affordable, but honestly it's so tedious that a medical surgery can be more cheaper. But i'm really more thnakful that i pick "food."
So now that i have nothing in my hands, i'm picking up food again. This is not an easy decision because i seriously hate / loathe cooking! But i did enjoy it a lot back then, i hope to find the grove the soonest back again.
And i promise not to be so preachy about it!
at 2:41 PM