(Not a movie reaction paper.)
When i saw friends posting about this lifestory movie of kurt cobain, i asked mark to find ways that we can watch it.
I cannot remember if i was a fan of nirvana, but i can remember that i kind of thought of them as the "backstreet boys" of the alternative music in the 90s. They're like everywhere. My roommate had all their cassete tapes. I used to listen to a closed friend, who was a UMD (universal motion dancers) fan, gushed over being torn between kurt and eddie vader(sp?). All the friends wanting to be in Ka Pedro's Brown underground show had probably rehearsed a nirvana song. A songhits cover of Kurt Cobain/nirvana had probably been pinned in one of the rooms of the boardinghouse i used to live. And, i had foo fighters cassete tape.
Back in those '90s, there was no online social media so kurt's story was a mystery. That's why i really want to watch the movie.
And, kurt cobain's (part of) story is that familiar daddy / mommy / broken family issue. His parents divorced, which led him to being passed around from father-mother-relatives and so the rejection / wanting-to-belong which is the very first in Maslow's Hierarchy of needs has not been satisfied. According to the movie he had some acceptance / rejection issue which led him to becoming that "great" artist in the hope of getting accepted. I dunno if it was a malcolm gladwell book which pointed out how "outliers" came from a broken family: steve jobs, larry elison, jeff bezos, bob marley, etc and mark john (who is not in the book).
So while watching the movie, mark had this all commentary on the side of how he is like kurt -- great way to experience the movie!
Mark John has an extraordinary issue with rejection, way before the outlier theory became popular. And since it has been used to explain how people with extreme personalities came from having daddy issues, mark john has been consciously using it also to explain his paranoid-level kind of rejection issues. He now used it to explain why he has always the need to be "great" at programming (please let it be) because he wants to be accepted. Poor boy!
I would have believed it right away, but then i also came from that circumstance. We both are raised single-handedly by mothers. And unfortunately, it did not get me anywhere to becoming outlier. Well, except for getting a boyfriend who thinks he is. My rejection issue is as normal as a selfie, I mean everyone has that rejection/acceptance issue but unfortunately i'm not as obsessed as kurt or even Mark. (Or wait, i should "eat, pray, love" first to find out.) anyhow, i'm writing this down as a sign that i am accepting Mark's rejection issue.
---
Back to the movie, i'm somehow amazed at how kurt can be really hardworking (hardworking in a sense on how he demanded his mates for daily scheduled rehearsals, on how he had to manually send demo tapes). And later on, it's amazing how he was able to pull it together -- hardworking / creative while stoned.
I wish he did not end up with Courtney though.
---
I researched about the movie, and it's actually produced by his daughter. She wanted to know who is father, and in a way demystify him so somehow his fans will stop putting him so much on a pedestal. But the thing is, anyone who had done and gone through that much will always be mystifying. 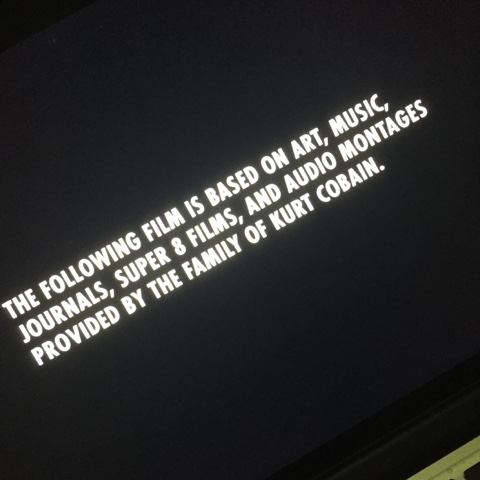